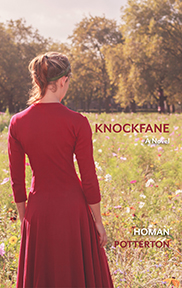 Knockfane is an enthralling drama exploring inheritance, heirship and family legacy, set against the backdrop of the Ireland of its time and the conventions, customs, mistrust and suspicions which governed both Protestants and Catholics, as they come to terms with each other’s world in a rapidly changing society.

Ireland in the mid-twentieth century, and Julia and Lydia Esdaile live with their widowed father, Willis, at Knockfane, a country house and farm where the Protestant Esdaile family have lived for centuries. When Willis inexplicably banishes his only son and heir, Edward, he concocts a complex plan to protect and preserve Knockfane for succeeding generations. But time passes, and Willis dies, and soon his intentions are threatened and thwarted by unforeseen events. Ultimately, it must fall to his daughters – the headstrong, confident Julia and the quiet, reflective Lydia – to protect the Knockfane legacy.

Suffused with gentle lyricism, this is an enthralling, elegant drama that explores the complexities of family, inheritance and legacy against the backdrop of the Ireland of its time, steeped in the conventions, customs, and deep-seated suspicions which governed both Protestants and Catholics in a rapidly changing society following Irish independence. Knockfane is a Big House novel for a new generation.

Published by Merrion Press 2019. Available from bookshops in Ireland and the UK.

In her review of Knockfane in The Sunday Times (Ireland) Anne Haverty (Irish novelist & poet) wrote:

The Irish Big House novel has a long and often illustrious line, with authors including Maria Edgeworth, Somerville and Ross, and Caroline Blackwood. It is usually tragicomic, depicting the decline and fall of the house in question, the disordered lives of its fading inhabitants, and the eccentric characters who work in it. Knockfane the fictional house of Homan Potterton’s first novel, has its own appeal but shares few of these tropes. Knockfane is not actually a Big House, certainly not the traditional crumbling pile, but a fine old farmhouse and its acreage is that of a strong farm rather than a landed estate. Its only claim to Anglo-Irish status may be that its owners, the Esdailes, are English originally and Protestants. They have their moments of disorderliness but these are kept well out of sight and they are, above all, stout country people who wouldn’t dream of spending their money foolishly. In their hands, Knockfane is in no danger of collapse or ruin. The only problem surrounds who will inherit the house and keep it in the Esdaile name. The plot’s focus is Willis Esdaile’s eccentric will. Issues of land and inheritance suggest intrigue and possible skulduggery. There are babies and banishments and long-lost cousins, quite enough to keep the reader occupied. To be able convincingly to show the reality of this rarely depicted stratum of Irish society is one of Potterton’s strengths. It can also elicit a note of dry humour.